A recap of the Pistons' busy offseason 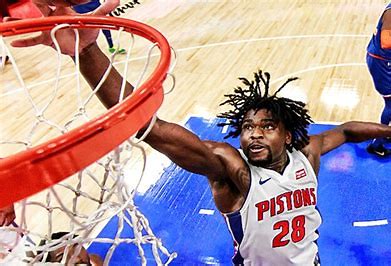 Following the hiring of new general manager, Troy Weaver, the Detroit Pistons quite literally, blew up their entire roster. Many trades and signings were made to give a new identity to Detroit, showing what the future truly holds for them.

The first trade the Pistons made this offseason notably featured the departure of shooting guard Luke Kennard. In exchange for Kennard, and four future second round picks, the Pistons received the draft rights to Sadiq Bey and Jaylen Hands, while also getting some other acquisitions. Although this trade might not make sense in what Detroit gave up, it makes sense with the type of identity the team is forming.

Although the Pistons dropped a couple picks back in the draft lottery, they still landed Killian Hayes at number seven overall. Hayes has already had experience playing basketball in France, separating himself from his other draft peers. One of the question marks on Hayes is his three point shot after catch, however he has proven to be an effective shooter off the dribble, meaning his catch and shoot three point abilities will likely improve.

The next trade made was a deal with the Atlanta Hawks. This trade worked great in Detroit’s favor, dumping the large contract of Tony Snell, while picking up Dewayne Dedmond, who was later waived. This deal shaved off $11 million of the used cap space for Detroit, giving them more money to play around with in free agency, a period where teams can sign players whose contracts with their former teams have expired.

Another minor trade that happened saw the Pistons gain center Tony Bradley and the freshly drafted Saban Lee in exchange for cash. Bradley was later flipped for forward Zhaire Smith who was waived to save cap space. Although these trades are a little lackluster, it’s just a part of the Pistons trying to gain young talent for the future.

Perhaps the biggest move made by the Pistons this offseason was the singing of Jerami Grant in a sign and trade deal with the Denver Nuggets. Grant averaged a solid 12 points last season on a contending Jazz team. Since Detroit is more barren in terms of talent compared to Denver, expect Grant to have a larger role here than in Denver, while also still displaying his great defensive abilities.

Although many other minor moves were made, the other most notable moves that were made were the signings of Jhalil Okafor and Josh Jackson. Although these players haven’t found their groove quite yet in the NBA, they both hail from being a top five selection in their respective drafts, meaning the potential for growth is there.

The signing of Ball brother, LiAngelo Ball might also prove to be a smart move by the Pistons. His brother, Lonzo, has proved his place in the NBA on the New Orleans Pelicans, and his other brother Lamelo was recently drafted 2nd overall to the Charlotte Hornets. The contract given to LiAngelo is a non-guaranteed deal, making this move a high win, low risk ratio.

While a win now attitude might not be what the Pistons have now, it sure has a high chance at being on the horizon. Pistons fans finally have something to look forward to.